The year is 2397 and to protect Starfleets interests in this time of uncertainty, Starfleet has re-assigned Captain Keiben Haistro and his entire Command Staff to the newly discovered and shrouded in mystery Cardassian Space Station located in the Hades Cluster of the Briar Patch. The Station, jokingly referred to as Styx Outpost and protected by it's three headed Prometheus Class Attack Hound the USS Cerberus is tasked with uncovering the secrets of the stations existence, exploring the planet that it orbits and continuing to gather together information about the long dead civilization of the T'Kon. 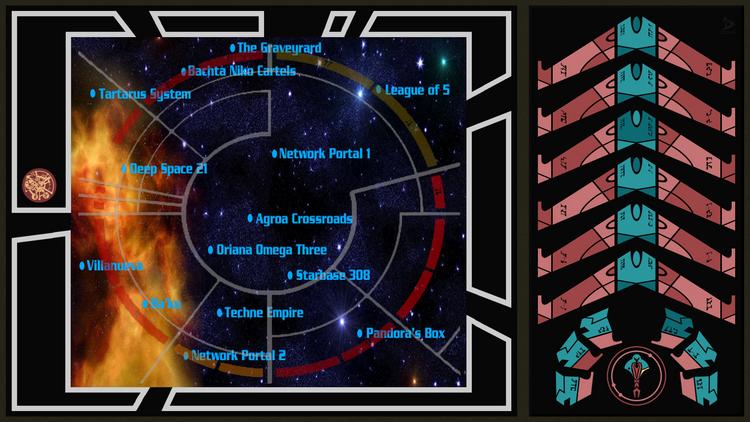 We are a community of Star Trek enthusiast forging our own way through the rich tapestry created by Gene Rodenberry. We are a friendly group always looking to expand out family.

So the end of the current mission story is looming and again I am marvelled at the talent we have accumulated on this little community of writers. You are all the dogs bollocks in that regard (For the non UK'er's, its a good thing!!!).

We will have amassed a nice 219 posts for this story from start to end which is only 22 posts shy of our previous one. Again, you are all amazing.

I will complete this current mission but we will still be able to complete the posts we have and they will add to that total. Any new posts, could we please hold them until I give the all clear to post all you lovely lovely people.

» Site has been updated

The site has been updated to the latest version of Nova to correct a security flaw. It is highly recommended that you change your password.

As of yesterday I closed "Episode 2 - Echoes of the Empire" and I just want to say a huge thank you to all. I personally thoroughly enjoyed writing through that story with you all and I genuinely look forward to our next story which has now gone live as the primary mission on the site. If there were any posts still for Episode 2 and they have vanished please do let me know as they should still be floating around on the site and may just need adjusting in regards to mission title. With luck though the site will just continue as normal or have changed the mission title over already.

With that in mind I just wanted to give you the running tally for mission posts which stood for Episode 2 at a stonking 241 total posts (Don't ask for word count... we ain't in Obsidian fleet any longer and I cannot be fecked to go check!). Over all this exceeded my expectations as did the level of character development from most of you.

Chief Stoun (Ed) will remain on LOA for a time longer and I will check in with him soon.

The next mission, "Episode 3 - Fear Is Fear Itself" is now live, and within the mission brief you will find some basic 'Act Notes' as guidance but if any of you have any questions then please do drop a message to me or find me on Discord.

As for crew evaluations... Because of the recent rebalance of ranks with the move from Obsidian Fleet Commander Holt and myself have decided to hold of on this until the end of Episode 3.

What do we mean by Crew Evaluations?

Essentially promotion. We won't be looking at length of service though as this is not a true reflection of what has been achieved in the game. Instead we will be looking at each character throughout a story, looking at input, creative contributions and a few other area's on the same lines... That said, if one of you believes that a player deserves a promotion then do speak to the command triad as we will take any recommendations on board.

And thats that. Happy Simming all you wonderful people.

Well it was short, it was sweet but it was amazing. Thank you all for the writing that has happened during our prologue mission. Full mission metrics are at the bottom of this new article. We are now officially into our first main line mission. Do not hesitate to contact me, Lieutenant Holt or Doctor D'BrooNi if you need any guidance with our next mission which went live yesterday - "Echoes Of An Empire".

In this new mission we will tackle the sensor data gathered by the USS Merlin in the brief encounter she had with our original attacker. The Admiral will help set us on our course into what I hope will become an engaging series of missions and opportunities to really develop our characters. It will also pit us against the two main enemies that we will face on our simm. Now these said big bad's are still a work in progress so if anyone has any thoughts about them drop a message into the discord channel 'Strategic Operations'. Everyone should have their own input on the creative process on this group of highly talented writers that I look forward to working with on this little ship.

Firstly I need to apologise, I should have announced this when his character was actually accepted onto the simm!!!!

That said, I would like to (belatedly) welcome Ensign Junjie Han Mr. on board as our new Chief Science Officer. Things are starting to move forward now and we are just about ready to kick our first full mission off. Once the current few prologue posts are up then we can make a real start. That said, if anyone wishes to start some character development posts you can.

Things to remember with this new mission:
-It is starting a couple weeks after the prologue so Copernicus is repaired.
-Some crew, such as our Chief Science Officer will be new to the ship completely
-Chief Stoun and Ensign Verona still need the formal offer of a post on Copernicus

And those few points are just to start with.

Making her way along one of the habitat decks, Sher’ra was looking for Jaas’rah’s quarters so she could speak with him. To be fair she’d been a little distant lately with all of her work and now with her move to the position of security and tactical chief on…

» The Start Of The Trail

The last meeting had ended, already making him feel far better about the planetary colony and also planning his own trip to the surface. The next meeting was on a slightly less enjoyable topic and something that would need to be kept in the strictest of confidence as it…

Keiben entered the wardroom still pouring over the initial planetary survey. On the surface, it appears almost a primaeval garden world. His major issue came from the fact it was such an untamed beauty as the last one he had been assigned to survey had tried to kill him…

The lighting along the promenade had started to fade up in luminosity, as if simulating a sun rise. It was something of a curiosity to Keiben given the militaristic nature of the Cardassian Union when this station had been built that they had taken into account this one very…

It had taken seemingly forever, but now, Peter felt ready. Well as ready as he could be because he still felt as though he'd never really be whole again. He'd had long conversations with Harley, very emotional ones within the privacy of his quarters. And once again, it had proven…

It had been a few days since the space station had been returned to its rightful timeline. Alena was beyond relieved. But she was also puzzled. She was near certain that she had been able to read some of the T'Kon letters when she and Commander Horn had visited the…

So I have just arrived here at the Starbase with orders in hand to be assigned as CSO aboard the Copernicus. She's a Nova class science ship and I have heard that she is going to be docking shortly so I am…