Episode 4 - The Fires Of Hades 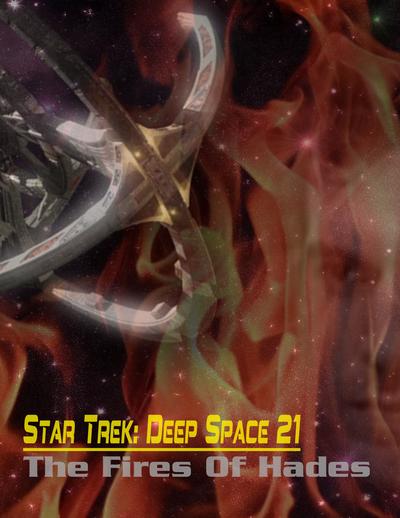 Infiltration: Starfleet Intelligence has uncovered information about a genetically engineered virus that targets specific DNA that was first encountered by the crew of the USS Merlin. The Virus has not only the member worlds of the Federation worried but Starfleet Medical as well. News has reached SFI that the Bacha Niko Cartels in an area of space called 'The Graveyard' may have the information. To that end Starfleet has dispatched a specialist to support in an undercover mission to infiltrate the Cartels and extract the information... It does not go to plan and could spell doom for the newly formed space station Deep Space 21.

Survival: The seemingly peaceful and idyllic planet of Ivalice sitting on the edge of the Briar Patch and orbited by an old Cardassian Space Station is soon to be the home of a newly established scientific colony designed to investigate the ruins of the long dead T'Kon civilization that still can be found in abundance on the surface. The only problem, the planet is now once again prey to the wildlife, something to be both amazed at and in fear of. Humans call them Dinosaurs but the crew of Deep Space 21 call them hell on earth.

Repairs: The newly discovered Sempok Nor, an old Cardassian Space Station orbits a garden world but held within its core are secrets that need to be uncovered. Before any of that can happen the station needs to be brought back to life and turned from a shell to a bustling hub of society in an otherwise inhospitable location of space. IS this something Captain Keiben Haistro and his crew can achieve? They hope so. Along the way they will have cause to mourn and to celebrate in equal measure.

Episode 1 - Phoenix From The Ashes

Following the devastating attack and the loss of all but a small handful of the ships senior officers the USS Copernicus limps home for repair and debrief. Lieutenant Commander Keiben Haistro takes command of the broken science vessel and of its original 80 crew only 17 remain alive. Doctor Melanie D’BrooNi has to not only hold together the crews physical wellbeing but step in as a makeshift Counsellor to hold together their mental health also and still come to terms with the loss of her close friends on the Copernicus.

Episode 2 - Echoes Of An Empire

The Feceration Starship Copernicus, a Nova Class vessel recently returned from a terrible battle that cost too many lives. The ships Second Officer and Chief Medical Officer the only two senior officers to make it through alive and of the eigthy crew, only sixteen survived.
Keiben Haistro has now assumed command at the bidding of Starfleet with a simple task, investigate the ruins on an unexplored planet designated as "The Garden". What should be a simple mission allowing the new crew to come together, allowing the old crew the time they need to grieve and pushing the limits of the small vessels resources but things never go to plan.

Episode 3 - Fear Is Fear Itself

How do you conquer fear when ones own fears are manifest. The crew of the USS Copernicus may have no other choice but to battle the darkest parts of their own beings before a resolution can be found.

The USS Copernicus is sent to investigate a long abandoned and forgotten space station, it is thought to be of T'Kon or even Iconian origin, recently discovered by a civilian vessel tucked away in a Nebula on the boarder of the Briar Patch. What they find is a technology so wonderous and dangerous that they may have to destroy it rather than understand it and that depends on if they can survive it.